There are varied treatments that have been used when it comes on to depression. There is now a high interest in the St. John’s wort as something that also can be used where depression is concerned. They have said that when it comes to this herb it can be used but has to be done under the supervision of a medical doctor as they have said that it will counteract with other medication and that can also prove to be harmful.

There have been studies that have shown that persons who are suffering from mild to moderate depression can use this herb and the side effects are less than when they are fed the prescription. This can’t be said for persons who have been said to have a severe case of depression. It has been compared to some of the same medications that have been taken and it has less side effects that what they will give to you.

With hyperforin, flavonoids and hypericin contained in the herb, are very beneficial to the health of the person. They said that what it contains will interact with the neurotransmitters that are present in the brain and therefore it is then able to allow the person to have a very calm and collective mood that will surely bring them into a better state. Doctors say that there are more beneficial chemicals that are present that also aids in that regard.

There are times when the herb, St. John’s wort, interacts with the other medication in the sense that it can either reduce the effect or it will increase the effect of the medication that is why it is recommended that you don’t take it without the advice of a doctor.

There are certain conditions that will result when you decide to take St. John’s wort along with antidepressants.  One of the st johns wort side effects is that it will surely increase the effect that the drug will have on you and that will sure cause distress in your system. That’s why is recommended t hat you don’ take the herb when you are taking drugs such as, sertraline (Zoloft), fluvoxamine (Luvox), Citalopram (Celexa), etc and they are collectively called SSRI.  There are many drugs that will surely have some side effects if they are taken with St. John’s and so what we stress on is that you speak with your doctor before thinking of going to that route. That will surely give you some insight as to what you can do and what would be best for you. 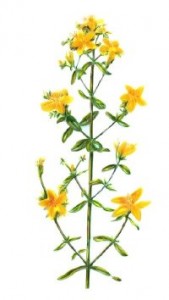